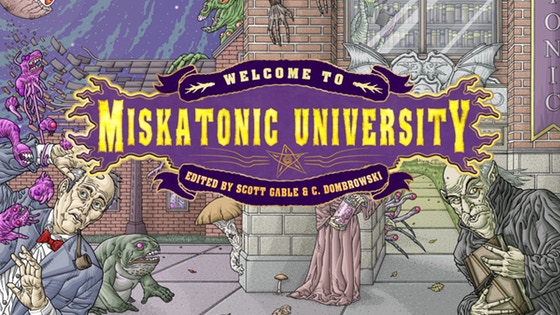 Welcome to Miskatonic University: An Anthology

An anthology of modern short stories inspired by that strange, magical place known as Miskatonic University.

Latest Updates from Our Project:

Welcome to all Miskatonic students and faculty (and alumni and prospectives)! As many of you may have ascertained from the BackerKit that was sent out recently, we are indeed creating the second anthology after all. After chatting with the authors, despite having not quite reached the stretch goal, we decided to plunge forward, and Frank Casey is busy creating that second cover illustration.

So yes, if you've already pledged for the two anthologies, you'll be getting them both. And if you haven't, you can still pre-order it through BackerKit. But also, the hand-bound deluxe edition will now include both anthologies in that "flip" format that I talked about during the campaign, and you can still order those too.

Other additions to the BackerKit include the chance to pre-order some other upcoming titles: The Queen of No Tomorrows by Matt Maxwell, Catfish Lullaby by AC Wise, and our Nowhereville: Weird is Other People anthology of the urban weird. (You can also pre-order them directly from Broken Eye Books as well.)

So next steps? Our BackerKit took a lot longer to set up than I expected (and a computer meltdown didn't help anything), but both of those are in the past now, and I'm working on edits and a final TOC for both anthologies, which I should have by the next update.